The big winner at the Irish Times Irish Theatre Awards, presented in association with TileStyle and held on Sunday night at the National Concert Hall, was Belfast’s Prime Cut and Lyric Theatre’s co-production of Red by John Logan.

A sturdy drama about the mercurial artist Mark Rothko and his new assistant, the production took four major awards including best production, best director for Emma Jordan, best actor for Patrick O’Kane as Rothko (also awarded for playing the tormented Woyzeck in Landmark Productions and Galway International Arts Festival’s Woyzeck in Winter) and, fittingly, best set design for Ciarán Bagnell’s evocation of Rothko’s cavernous studio – who was also awarded for his labyrinthine work on the Gate’s The Great Gatsby.

For The Irish Times Irish Theatre Awards, now celebrating its 21st edition, Red was a significant winner, a play about the purpose of art staged during a year in which Irish theatre seemed to be asking itself soul-searching questions.

“It was a year of change and challenge,” Ella Daly said during the judges’ speech, highlighting new approaches to staging work at the Gate and the Abbey, while reminding the audience of the many women who spoke out in the year of #MeToo “in the strongest possible terms against harassment and abuse”.

Presented by the wryly comic pairing of Amy Conroy and Clare Barrett, who brought a large toy elephant to the stage, the evening featured pointed and arch allusions to a year rocked by allegations of sexual harassment. “I was just going to ignore it,” Conroy said to knowing laughter in the audience, many of whom wore black inspired by the Time’s Up campaign. “It seems to have worked really well for years.”

The new Gate theatre director Selina Cartmell, receiving the best costume design on behalf of Peter O’Brien for The Great Gatsby, was more forthright. “I will not waver in our search for trust and transparency,” she said, thanking audiences for their support during a difficult year. The previous day, the theatre’s board announced it would not publish a report into allegation of abuse of power and harassment by former director Michael Colgan.

It was a night in which playwright Enda Walsh’s name was heard often, even if he could not be present. The writer won best new play for The Same, staged by Corcadorca in a decommissioned Cork prison, and for best opera, as librettist, shared with composer Donnacha Dennehy for Landmark Productions and Wide Open Opera’s co-production of The Second Violinist.

Walsh’s play The Same provided sisters Catherine Walsh and Eileen Walshwith a shared award for best actress, recognised for playing the same troubled woman 10 years apart. “We can’t share anything,” Eileen mock complained from the podium. In the inaugural year for the best ensemble award, a double-bill of Enda Walsh’s early plays Disco Pigs and Sucking Dublin provided new company Reality:Check with their first award. The other new category, best movement direction, was awarded to Laura Murphy for her work on the Bram Stoker Festival’s Whitby.

Many of this year’s winners were acknowledged for multiple achievements. Rosaleen Linehan, recipient of the special tribute award for 2008, quipped of the earlier trophy, “the sticker on the back said ‘goodbye’.” Linehan took best supporting actress for two roles: as the otherworldly Hurdy Gurdy Man in Landmark Productions and Galway International Arts Festival’s co-production of Woyzeck in Winter and for playing Mags in the Gate theatre production of The Red Shoes. Marty Rea, another previous winner, won best supporting actor for roles in both Druid’s staging of King of the Castle and the Gate’s adventurous production of The Great Gatsby.

That brought four awards to the Gate theatre, a number matched by Corcadorca and the Lyric theatre and Prime Cut’s co-production. The Abbey won the judges’ special award for its popular new scheme of Free First Previews.

This year’s special tribute award winner, the actor Eleanor Methven, received a standing ovation when acknowledged for her body of work both on and off the stage. She combined the language of political change with the value of the arts to move and intoxicate. “Let’s move forward, this is a celebratory evening,” she said. “But let’s not pour old wine into new bottles. Smash those glasses. But drink responsibly.” 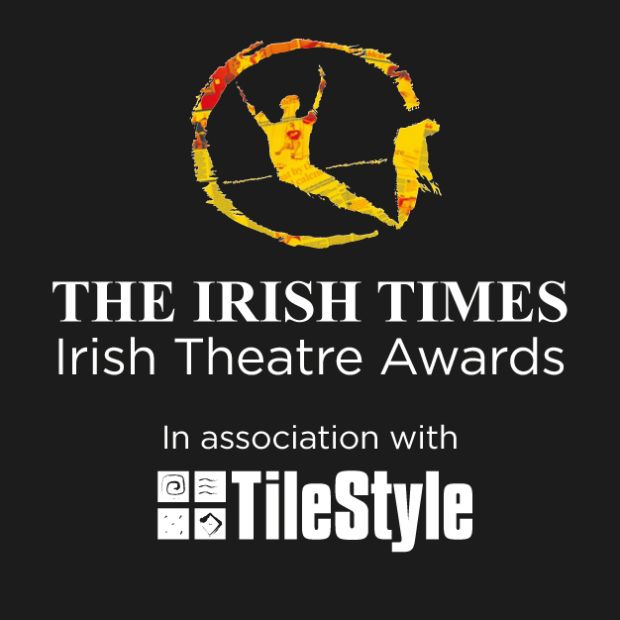 BEST SUPPORTING ACTRESS
Rosaleen Linehan for her role as Hurdy Gurdy Man in Landmark Productions and Galway International Arts Festival’s coproduction of Woyzeck in Winter, and her role as Mags in the Gate Theatre production of The Red Shoes

BEST SOUNDSCAPE
Mel Mercier for Corcadorca’s production of Far Away